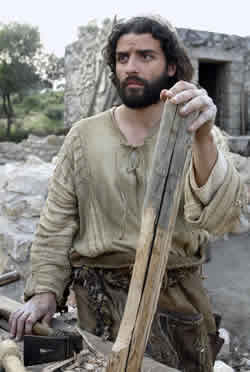 "Do you really expect me to go to Bethlehem?" Joseph banged down his chisel on the scarred bench.

Ephraim, his cousin, had just entered the low workshop. "You don’t have a choice, Joseph. If you don’t go the Romans will confiscate your house and your precious tools. Just try to carve a yoke with your fingernails."

"What are we, cowards?" the carpenter retorted. "Mark my words, Ephraim, this ‘Enroll-in-your-ancestral-city’ business is nothing more than a way to squeeze more taxes out of us. If we give into those foreign tyrants now they’ll just be back for more money."

"What’s more," Joseph continued, "you’re crazy if you think I’d take Mary on a trip this month. She’d probably have the baby on the way!"

"Couldn’t you just leave her with your mother for a couple of weeks? She’d be all right. Nobody says the women have to go. It’s the heads of households who have to register."

So why not leave her at home?"

Joseph brushed the woodchips aside and motioned for his cousin to sit down. The carpenter spoke in a low but earnest voice. "Mary’s aunt has made life miserable for her ever since she found out Mary was pregnant. Some people were willing to let it go. Not Tabitha."

"She got my wife all stirred up about it," Ephraim volunteered.

"Not just your wife. Most of the women in this town go out of their way to avoid her. At the village well they whisper, "Little slut!" just loud enough for her to hear. Many’s the day she’s come running home in tears."

"People sure can be cruel," Ephraim said. "At least you and Mary went ahead and got married."

Ephraim got up. "Well, you are going to Bethlehem, aren’t you? You’d be a fool to get the Romans on your back. You know what they did to old Ben."

Joseph stood up slowly. "Yes, I’ll go. But Mary will have to come along. There’s no way I’d leave her in Nazareth by herself!"

However, when Joseph talked to Mary about it, she didn’t seem nearly as sure as her husband. "How could I walk all that way?" she said. "I waddle now. I just can’t make it." 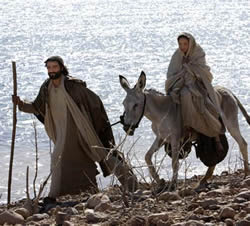 "Mary, we’ll bring old Jake. You can ride him when you get tired."

"Have you ever ridden on Jake?

"That animal is the most bony, jolting mule in Nazareth. I’d rather walk!"

She did ride, though… some of the way. Joseph would finally stop for the day when Mary just couldn’t take any more. He’d help her down off Jake, then he’d fix a fire while she would unload their heavy blankets and try to find some shelter under a tree or large rock.

Mary would always be the center of attention among the few women traveling that time of year.

"I remember when I was carrying Levi," one would start. "Made my feet swell. I couldn’t do anything for months."

"That’s nothing," replied another, "my sister got so big everyone thought she was carrying twins. But her time came there was only one baby. Died though."

Joseph glanced over at Mary in the flickering firelight. He could see fear flit across her face. Her hands moved to her swollen belly so she could feel the baby’s reassuring kick.

The women didn’t notice. The first one went on, "Oh, the pain’s so awful! I’m glad I’m too old to have any more babies."

Joseph put his arm around Mary’s shoulders and pulled her close. Only one more night on the road before Bethlehem. 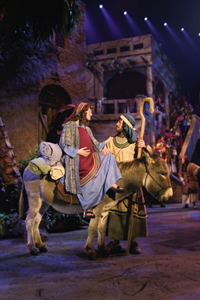 They reached the sleepy village of Joseph’s ancestors just about dusk the fifth day. Joseph went to the inn and nearby houses trying to find a place to sleep. "God," he whispered as he combed the town, "can’t You find us a decent place to have this baby?" Nothing.

All at once he saw Mary’s face tighten. She tried to suppress a groan as she fought with the pain. It was a long moment before she relaxed, but he could see worry written all over her.

Joseph went back to the innkeeper again. "Are you sure there isn’t any room? My wife’s about to have a baby. We’ve got to find a place out of this wind tonight!"

The innkeeper thought a while. "Did you try the house at the end of the street? They sometimes take people in."

"Any relatives in town? Any second cousins?"

Mary was shivering now,in obvious discomfort. "Joseph," she said weakly, "I’ve got to lie down somewhere."

"Well,there’s the stable in the back," offered the innkeeper at long last. "Of course, it’s full of animals from all the visitors in town for that blasted Roman census. But if you can find a place in the corner, I guess that’d be okay." He paused. "Just don’t keep the animals awake all night."

It was the other way around. The dozen donkeys in the strange barn never stopped moving. And the smell was overpowering to Mary who had been fighting nausea as her pains got stronger. 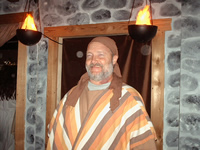 In the wee hours of the morning Joseph knocked on the innkeeper’s door again.

"What do you want this time of night?" the innkeeper snarled when he finally came to the door.

"Is there a midwife in town?"

"Oh, it’s you. A midwife? Yes, old Martha lives in a little house about three blocks from here. You go down the main road, turn left at the two-story house, and go to the alley. You can’t miss it. You go down the alley and across the pasture. She lives in a shack just behind the third house after that."

"I … I really don’t think I should leave my wife. Her pains are coming awfully fast now…. Could you go?"

"Jonathan!" the innkeeper yelled into his darkened house. "Get up and fetch old Martha. A lady’s having a baby in the barn. Hurry!"

He turned to Joseph as he closed the door. "Have some pity, man. My whole family’s awake now."

Pretty soon the door opened again and a young lad ran off in the chilly air. After a while he returned, walking slowly so he wouldn’t outdistance the old midwife whose arthritis certainly didn’t to take to cold winter nights. The boy was shivering by the time he got to the stable.

"Here’s Martha, sir," he muttered quickly, and darted back into the warmth of his house.

The old lady put them at ease right away. She had Joseph fetch water and cloths from the innkeeper. It must have been nearly two in the morning by the time the baby came, and another hour before Joseph dug into his robe for a few coins to give the old woman as she hobbled away. 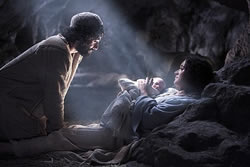 Then he returned to his wife and took her hand as they looked into the puffy face of their son. Alone at last.

"I’m so tired, Joseph," Mary said,settling back into the blanket-covered straw.

The baby finally stopped crying and drifted off to sleep.

Joseph stirred a few minutes later as some men peered from the darkness into the lamp-lit stable. He nudged Mary awake and reached for his staff.

"What do you want?" Joseph said to the men in a forced whisper. "Don’t wake the baby."

"We’re shepherds," one called out. The baby started crying.

"We saw angels out on the hills an hour ago." The entire story tumbled out as the shepherds edged into the stable to see the baby. Joseph relaxed his grip on the staff. 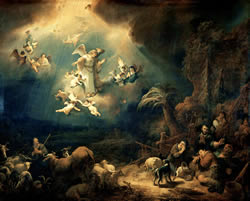 The shepherd continued, "And the angel told us, ‘To you is born this day in the City of David a Savior which is Messiah the Lord.’ The angel even told us about the swaddling cloths and the manger here."

"The angel told you about the manger, too?" Joseph interrupted.

Joseph glanced over at Mary. Her eyes met his. He squeezed her hand.

"This baby is the Messiah, isn’t he?" Joseph said quietly. "After all these hassles I had started to question. But…" He paused. "It’s almost like God planned the whole thing: the trip neither of us wanted to take." He chuckled. "He must have seen you on bony old Jake." Joseph laughed out loud. "Even this smelly old barn and it’s manger." 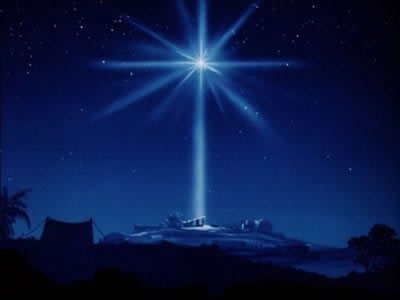