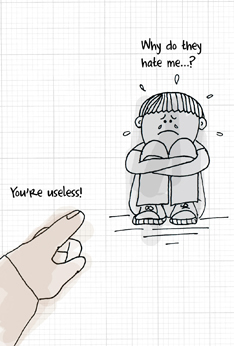 "Sticks and stones my break my bones but names will never hurt me."

This childhood phrase infuriates me to no end. I personally feel it diminishes the effects of emotional abuse. Society often doesn’t recognized it as a genuine form of abuse. People see the effects of physical abuse… they  see the scars. The scars from emotional abuse are hidden deep inside.

While I was recovering from my childhood memories returning, I felt people tended to minimize the importance of emotional abuse and/or the damage it does. The attitude that it didn’t belong in the same class as physical or sexual abuse, makes it harder to heal.

Thankfully, I think this is beginning to change. People are beginning to recognize, understand and acknowledge the lasting and severe impact of childhood emotional abuse.

Beverly Engel, MFCC provides a wonderful explanation of Emotional abuse and it’s affects in her book The Emotionally Abused Woman. (emotional abuse happens to both men and women and this explain applies to both)

"Emotional abuse is any behavior that is designed to control another person through the use of fear, humiliation, and verbal or physical assaults. It can include verbal abuse and constant criticism to more subtle tactics like intimidation, manipulation, and refusal to ever be pleased. Emotional abuse is like brainwashing in that it systematically wears away at the victim’s self confidence, sense of self worth, trust in her perceptions, and self-concept. Whether it be by constant berating and belittling, by intimidation, or under the guise of "guidance" or teaching, the results are similar. Eventually, the recipient loses all sense of self and all remnants of personal value.

Emotional abuse cuts to the very core;of a person, creating scars that may be longer-lasting than physical ones. With emotional abuse, the insults, insinuations, criticism and accusations slowly eat away at the victim’s self esteem until she is incapable of judging the situation realistically. She has become so beaten down emotionally that she blames herself for the abuse. Her self esteem is so low that she clings to the abuser.

Emotional abuse victims can become so convinced that they are worthless that they believe that no one else could want them. They stay in abusive situations because they believe they have nowhere else to go. Their ultimate fear is being all alone."

Emotional abuse conducts a psychological warfare for control and power over ones individualism. It has the capacity to erode away one’s self identity. It murders your soul and drains the life energy from your core being. It can leave your inner identity shattered.

Emotional abuse robs you of sense of hopefulness; about the future and makes you doubt any; worthwhile contribution you can make to the world.

Emotional abuse dehumanizes the individual. They begin to wonder if they have any right to go on living; or even asking for help.

Can A Car Accident Help Explain The Effect Of Emotional Abuse

I finally found a  way to express the effect and damage left from emotional abuse. It’s the best explanation I came up with to help people understand the destructiveness of this form of abuse.

They’re driving along when all of a sudden the car experiences an accident.

Physically abused is thrown from the car and lays on the ground bleeding with several broken bones. You can physically the trauma the left by the accident.

Emotionally abused hits the stirring wheel and jerks her head from the impact. Other than feeling a little soar and shaken, appears fine. She get out of the car to check on Physically abused.

The ambulance arrives and sees Physically abused on the ground and immediately begin treating her injuries.

Emotionally abused diminishes her own injuries. (an attitude typical of people emotionally abused)  She thinks her injuries are nothing compared to Physically abused. She tells the attendees she is fine, even though she hurts inside.

The attendees rush Physically abused to the hospital. Sirens blaring, alerting everyone who hears them to the seriousness of her injuries. Her injures are assessed, acknowledged and validated in the emergency room.

She immediately receive the necessary treatment. Her condition stabilizes and is given a good chance of recovering.

That evening, Emotionally abused dies at home. Later an autopsy reveals what nobody saw. Cause of death: internal bleeding.

Physical abuse leaves behind bruises and broken bones, while emotional abuse kills the self esteem of the victim.

Recognizing The Effects of Emotional Abuse

Remember any form of abuse is about power and control. Don’t dismiss or underestimate the effects of emotional abuse.

Activist and author Saul Alinsky didn’t minimize the effects of verbal abuse. He elevates emotional abuse to a national level as an effective power tactic in his book Rules for Radicals.

Rule 5: "Ridicule is man’s most potent weapon. It is almost impossible to counterattack ridicule. Also, it infuriates the opposition, who then react to your advantage."

"Sticks and stones can break your bones but words can KILL your self respect, your spirit and your true self.."