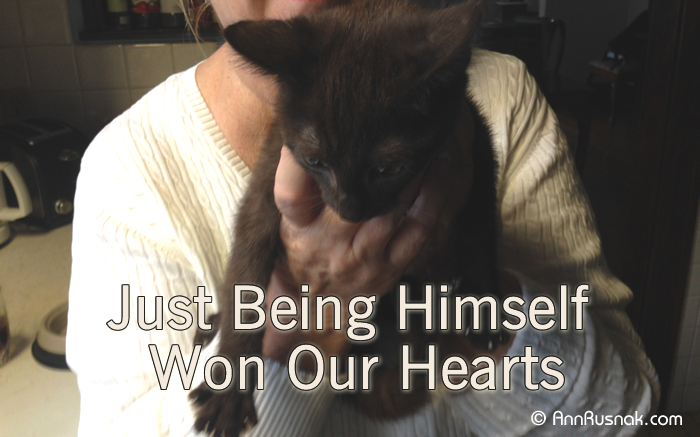 Just Being Himself Won Our Hearts

Spider entered my life on November 7. He was an unexpected gift and would only be in our lives for a week. In that short week, he stole both mine and my husband’s heart.

We stopped at the pet store to pick up litter and I always go over to the kitty kennel to pet the kittens. There was an adorable brown kitten.

He rubbed his head against my finger which activated his purr switch. This little guy was a big purr machine. There was something special about him and an invisible connection was born.

The petting stopped as I go join my husband in the checkout line. This little guy wanted more and meowed in protest as I left. I look over and he’s watching me at the register.

We start heading home when out of the blue my husband says, "Should we get the kitten?" His totally uncharacteristic remark caught me by surprise. He said there was something in my eyes when I was petting him and was surprised I didn’t ask when were at the store.

I’ll be honest, I wasn’t sure I wanted another kitten. My current cat, Dusty, has cancer and I already decided when she passes away, not to get another cat. There was something in my heart that ached for the little guy at the store. Yes we did connect.

When my husband made this suggestion based on a look I had, I figured I’d better go with it and make this little brown kitty a part of our family. 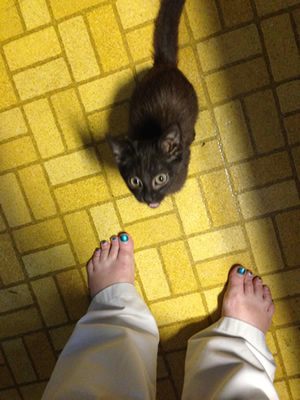 The light brown circles around his eye and his svelte, sleek body and long tail gave him the appearance of a spider monkey. Thus earning the name Spider.

Spider, according to the APL, was recently removed from a bad situation. His life didn’t start off on a good note. His personality shined through regardless of what happened to him. He didn’t let his past hold him back.

He made himself right at home. Running around exploring and crying when he lost sight of me. He loved being cuddled, just like Dusty.
This fun, loving little purr machine totally stole our hearts right away. He vocally expressed how he enjoyed his meals by making loud "yum yum" noises while eating.

He followed me throughout the house and got right into my morning meditation routine by joining Dusty on my lap. Giving me a stereo effect with their purring.

A couple of days later, Spider became less active and began sleeping more. At first I figured it was from all the trauma of being removed from his first home, getting neutered and shots at the APL, taken to the pet store and then finally coming to our home. All within a week.

Thursday turned into concerned when I got home that evening to see he didn’t touch his food. My husband said he threw up when he got home and he threw up again when I arrived.

The vet office was closed so I would call them in the morning to get him in. He was drinking water and still walking around although weakly. He drank some more water before we went to sleep.

At 2:00 in the morning, he started crying and I noticed he was weaker. We rushed him to the emergency room at the animal hospital. The emergency vet said he was critical and would give him liquids. They would still need to find out what caused the situation in the first place.

We returned in the morning with the vet giving us bad news. Apparently, Spider had a rare fatal parvovirus. We opted not to put him down there but to take him to our vet who was waiting for him. We still wanted to give him a chance even if it was a slim one.

I held and stroked Spider on the ride over while he looked up at me. At our vet’s we decided if he didn’t show signs of recovery by late morning, we would put him down. Our vet said he still might die during supportive care. We understood. Hugged and kissed him before she took him back to hook up the IV again.

Spider passed away before she could even begin.

We were told by the emergency room and our vet that there was nothing we could have done for him. This virus was fatal. By the time the APL rescued him, it was too late for the vaccine to take effect.

It still didn’t ease the pain. I’m comforted through tears that *God choose me to give this little guy’s last week of life, a warm, loving home.

Spider never stood a chance, even after his rescue. He didn’t let his horrible beginning keep him from being a warm, loving little kitten, full of joy and fun. He let us in, took our focus off our problems and showed us not to let the past determine your future.

What incident(s) in your life do you let hold you back from being you?

To Your Unstoppable Success

*Substitute Universe, Divine Spirit or whatever works for you.